1.Japan's accession to the UN 1958 and 1998 agreements and JAPIA's activities to harmonize international standards

In 1998, the Japanese government became the 43rd country to sign the United Nations 1958 Agreement, a system of mutual recognition of certification. It also acceded to the 1998 agreement, which aims to unify the standards of different certification systems in different regions. As a result, domestic automobile safety standards have moved toward international harmonization, with lamps, the first item to adopt UN standards, leading the way. In 2000, JAPIA established a Regulation and Certification Systems mainly consisting of manufacturers of items that had introduced the initial United Nations standards in sympathy with these activities for harmonization of international standards, and participated in Japan's standards harmonization activities led by JASIC, in which the Ministry of Land, Infrastructure, Transport and Tourism(MILT), JAMA, and other organizations participated.

In 2002, JAPIA signed a Memorandum of Understanding with CLEPA for mutual cooperation on the 1958 Agreement. JAPIA also participated in WP29 by registering JAPIA/CLEPA/MEMA as an international NGO with UN/WP29, in collaboration with MEMA, a signatory to the 1998 Agreement. (See the following diagram for the standards harmonization activities of JAPIA) 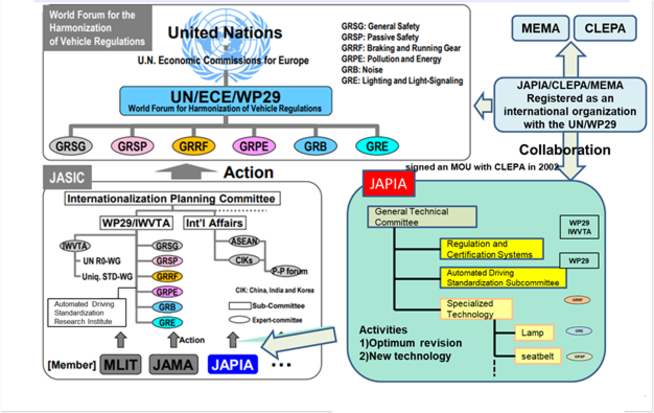 2.JAPIA’s approach to the Regulation and Certification Systems in emerging countries

The Regulation and Certification Systems of JAPIA identifies common issues related to regulation and certification, formulates measures and concrete action plans to resolve these issues, and mobilizes the power of JAPIA members to promote lobbying of national authorities and the industry through the collective voice of the organization. Particularly in emerging countries, along with motorization, regulations and certification systems are being developed and inexpensive inferior products are being eliminated, and it is necessary to collect information on the systems in each country in cooperation with other organizations (JAMA, JASIC, CLEPA, etc.) .So the working group corresponding to each region have been established in the Regulation and Certification Systems, which are managed systematically, in order to keep abreast of information and disseminate the opinions of the JAPIA at the global level. In 2006, CCC certification, an original certification, was expanded to 13 products in China, including lamps, and we worked with the JAMA to address this issue. In the same year, India also launched its own certification system, AIS-037, and the Regulations and Certification Systems dispatched missions and held briefing sessions. Every year, a mission is dispatched to the ASEAN to collect information of ASEAN-MRA, which aims to unify the technical regulations in the ASEAN region.

3.Standards for Automated Driving and the JAPIA’s response 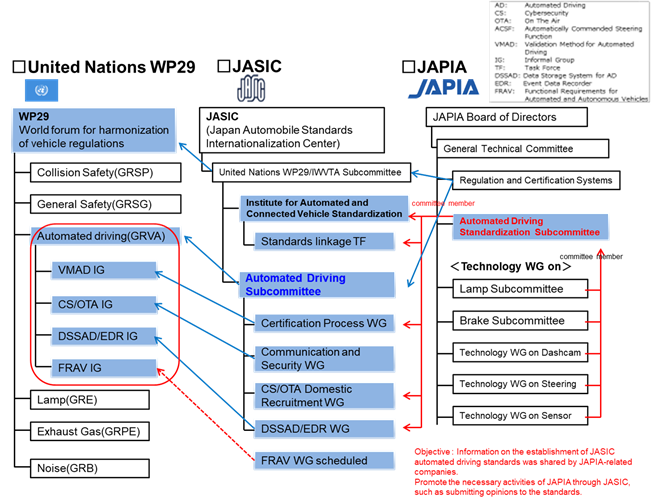